Edmonton based Soprano Jodi Penner’s career spans the worlds of opera, musical theatre, concert, radio and television. An accomplished musical artist as well as actor she has performed all over the world: Canada and the USA as well as Scotland, Russia, Italy, Austria, and Bolivia.

"Cielos Azules de Ensueños "project is going to raise funds for a rural music school in the small pueblito of Santiago de Chiquitos, Bolivia, about 5.5 hrs away from Santa Cruz, Bolivia and about 3 hrs away from the Brazilian border. The area is on the edge of the Amazon basin and there is a great tradition of Bolivian Baroque music in the region.The album is a blend of Jazz, Bolivian folksongs, and Jodi Penner's own songwriting originals. The invited artists for this album include: Erick Cuevas Jazz Band, Luis Montoya, Israel Arias, Carlos Osinaga, Fabian Padilla, The Vikings Brass Band (Norway), Jiri Sommer, Irina Ogurtsova, Fernando Diez, Alejandro Ortiz, and last but not least, Ana Lucia Maldonado, and Jodi Penner. Recording and Production: Ray Subieta. Cover Art and Album artwork: Leoni. Graphic Design: Anna Schroeder. All recording was done in Santa Cruz, Bolivia in 2018.

The album is fresh, mellow and uplfiting!

Tree In A Storm - Album

Tree In A Storm is Jodi's first solo Album, released in 2007 in memory of Scott Mitchell. The album is a blend of celtic, singer-songwriter and "hymnnotic" originals as well as timeless classics like "Be Still My Soul" and Faure's "En Priere".
Tree In A Storm 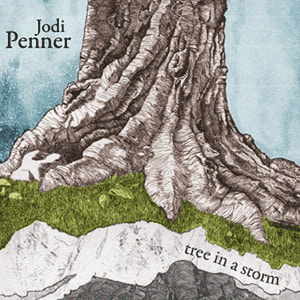 Jodi Penner-  Full Album
Produced by Brian Morykon, in memory of Scott Mitchell.
Winds of God
Be Near Me Still
Kyrie
Cell#3
Prodigal
Be Still My Soul
Rescue Me
Wayfaring Stranger
En Priere
Now
They That Sow (in Tears)
Tree In a Storm
Powered by